Solar cells are multiple panel-conductor-electrode systems which, when joined with several others, can generate a tangible and significant amount of electrical current. There are three main types of solar cells, which differ primarily in the material used for the semiconductor and electrode. The process occurs in two main steps: collection of sunlight using solar panels, and conversion of the energy present in the rays into electricity. Solar panels focus sunray into a high-energy photon beam using mirrors and angled lenses. This light is then directed at a length of metal or silicon- or selenium-based semiconductor. As the photon collides with the metal or semiconductor, electrons are excited from their ground state orbitals. The electrons either fall back into their ground states, dissipating the energy as heat, which is not preferred, or travel through the material towards an electrode. The motion of negatively-charged electrons generates a current in the semiconductor. 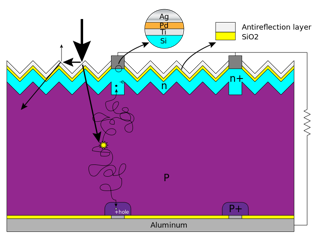 Monocrystalline silicon is made from silicon ingots that have been processed to form a single, large crystal. Raw silicon undergoes the Czochralski process, which cultivates a single large crystal from melted silicon through the use of a seed crystal and maneuvering of the growing crystal, often by spinning the crystal as it is drawn through the liquid silicon. This material has the highest solar-to-electricity conversion efficiency and consequently the best space efficiency, but they are the most expensive to manufacture and can decrease in efficiency in colder weather. Costs may vary frequently due to the dependence on manufacturing costs and materials cost for silicon, iron, and glass.

There are many configurations of solar cells on the market to perform a range of possible functions.  It is imperative that solar cells remain cost-effective, regardless of the lower conversion efficiency of sunlight to electricity. Commercial solar photovoltaic panels  are composed of many solar cells combined under a sheet of glass, which protects the silicon crystals, or wafers. The solar cells may be connected in parallel to yield a higher current in the circuit, thus creating a higher additive voltage effect. The combined solar cells in the solar photovoltaic panel can then transfer the energy from the sun to direct current (DC) electricity, or, with the use of an inverter, to alternating current (AC) electricity.

Amorphous, or thin-film cells, involve coating a surface, such as glass, a cheap metal, or other material, with the metal/semiconductor. The semiconductor, generally silicon or some combination of two or more of silicon, cadmium, telluride, indium, selenide, copper, and gallium, is laid in thin sheets on the surface and functions under the same mechanism described above. These are the cheapest and easiest type of solar cells to mass-produce, but they have an extremely poor space-efficiency compared to the monocrystalline and polycrystalline cells. These cells have been used far less than mono- or polycrystalline silicon cells due to the relatively high cost of all three technologies and the fact that the thin-film cells have the lowest efficiency.