Solar thermal energy, commonly referred to as concentrated solar power (CSP), is generated through the use of collectors. The types of collectors include a parabolic dish, trough, and heliostats. Conventional CSP systems function by concentrating sunlight into a small receiver, where it is then converted to heat by an absorber. The heat that has been generated from the sun and captured in the receiver can then be stored within the heat transfer fluid inside a thermal energy storage system. The heat transfer fluid delivers heat to a heated fluidized energy exchanger that generates electricity. Instead of converting sunlight directly to electricity, as solar panels do, solar thermal energy systems convert sunlight into heat, and then converts the heat into electricity. 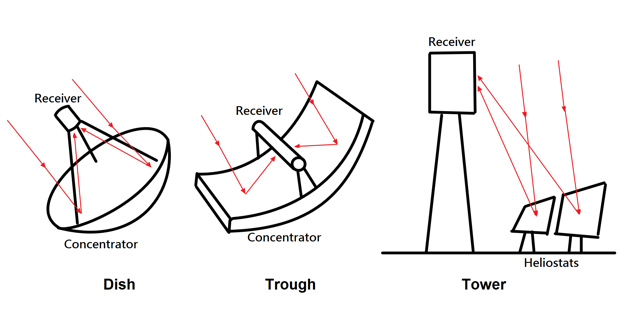 Point-focus solar concentrators (PFSCs) have high concentration ratios and use two-axis tracking to maintain direct sunlight throughout the day and with the changing seasons, which makes them more complex and expensive. PFSCs are most often used in medium-to-high solar-concentrating systems, such as in parabolic dish reflectors or heliostat fields. Parabolic dish reflectors move on a double axis and direct light at the receiver that is attached to the dish, whereas heliostat fields consist of many individual mirrors that track the sun to reflect light at one central, raised collector. 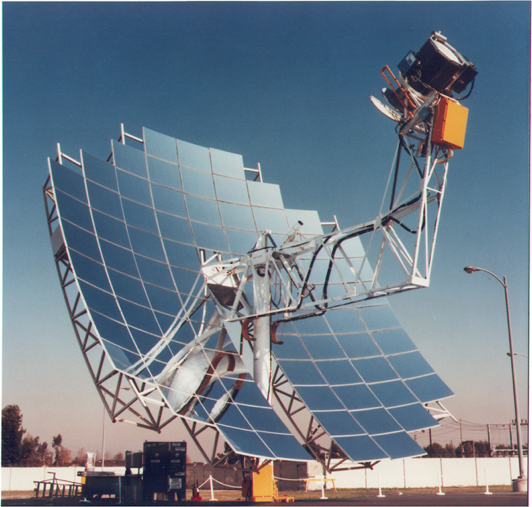 Line focus solar concentrators (LFSCs) have lower concentration ratios, and use simpler, less expensive one-axis solar tracking technology. LFSCs are most often used in low-to-medium solar-concentrating systems, such as parabolic trough collectors (PTCs) or linear Fresnel reflectors (LFRs). PTCs use a long, trough-shaped mirror to focus sunlight on a pipe receiver in the center, which is attached to the trough-shaped mirror and moves with it. In contrast, LFRs utilize many long mirrors with one-axis solar tracking to reflect sunlight into one centralized, raised collector.

The solar concentrators or collectors point at solar receivers, delivering concentrated sunlight to them. The main purpose of the receivers is to efficiently convert sunlight into heat. Receivers always have an absorber attached to them, in which the sunlight is converted to heat, which can then be used to generate energy.

The most common types of solar receivers are central receivers and vacuum tubes. All have a type of absorber built into them. Central receivers, also known as “power towers,” are most commonly used in heliostat fields, allowing for the many mirrors in the field to direct sunlight to one high point in the field. The absorber in the central receiver can then either store the heat generated by the sunlight directed at the receiver, or can immediately convert this heat to electricity and send the electricity back into the system’s electrical grid. Vacuum tubes are the primary receivers used for LFSCs and function as the housing for the heat transfer fluid to pass through. The fluid gains heat and then retains that heat because the vacuum tube that encases it is void of matter, reducing convective heat losses. The heat transfer fluid is then delivered to an absorber, where heat can be stored, or to a heat exchanger engine to convert the heat into electricity. 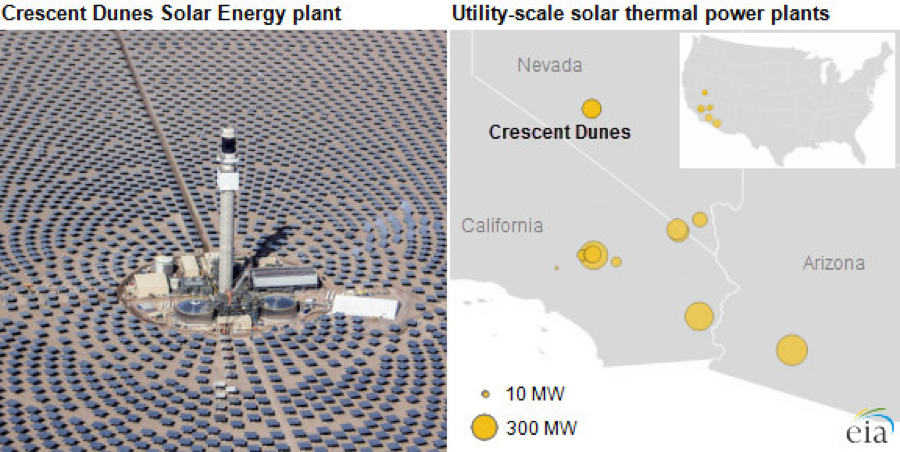