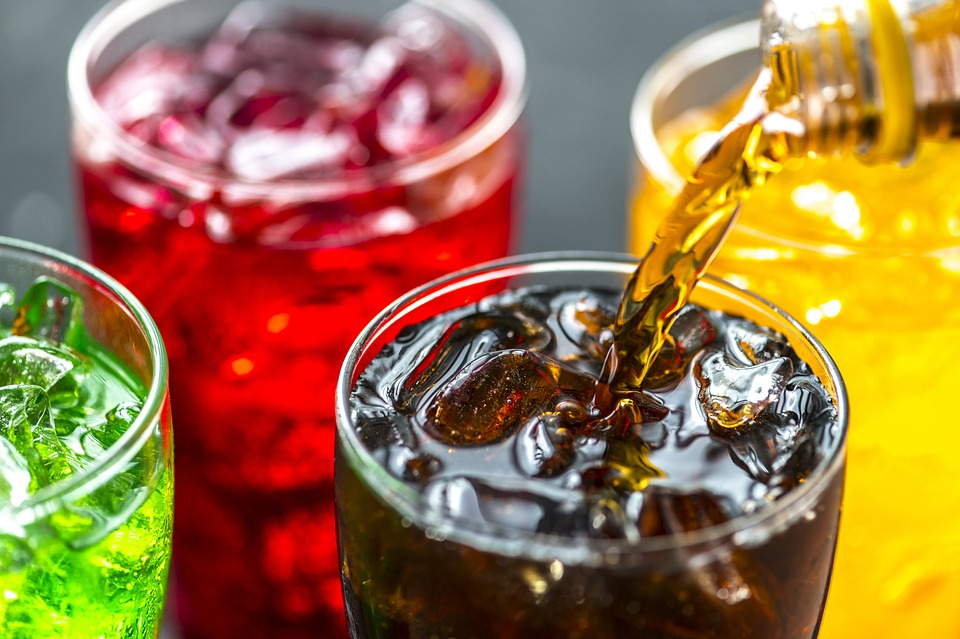 The main ingredients of soft drinks are carbonated water, sweeteners, acidulants, preservatives, flavorings, and colorants, which need to be prepared before being mixed to make soft drinks. Soft drink preparation includes process water treatment and other ingredient operations.

High purity water, the largest ingredient in soft drinks, is necessary because contaminants can affect the taste, odor, and appearance of the final product. As a result, soft drink bottlers begin the process by treating municipal water to remove inorganic and organic compounds, contaminating microbes, and particulate matter. The most common method of water purification is chemical treatment. This treatment starts with the addition of chlorine to disinfect the water.  Oxidizing agents are further added to oxidize impurities in the water. Chemical lime is then added to remove metal cations, also known as “softening” the water.  To remove products formed by the previous chemical additions, sulfate salts are added to precipitate out the products. This operation, known as coagulation, is carried out in a reaction tank where settled precipitates can be removed from the bottom of the tank. After precipitates are removed, the water passes through an adsorber , such as the ones shown below, to remove chlorine and organic compounds. Treatment can be finished by a final filtration , or polishing, step before the water is used in further production. 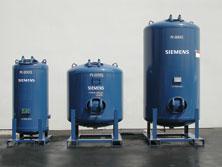 More common in newer plants, unit operations used for process water treatment c an include reverse osmosis, ultrafiltration, and ion exchange. In a reverse osmosis system, shown below, the municipal feed water is pumped through a semipermeable membrane that particulate matter and microbes cannot pass through. Additionally, the membrane is charged so that dissolved ions and organic material are retained on the feed side of the membrane. The water passing through the membrane is free of contaminants and can be used in further production. 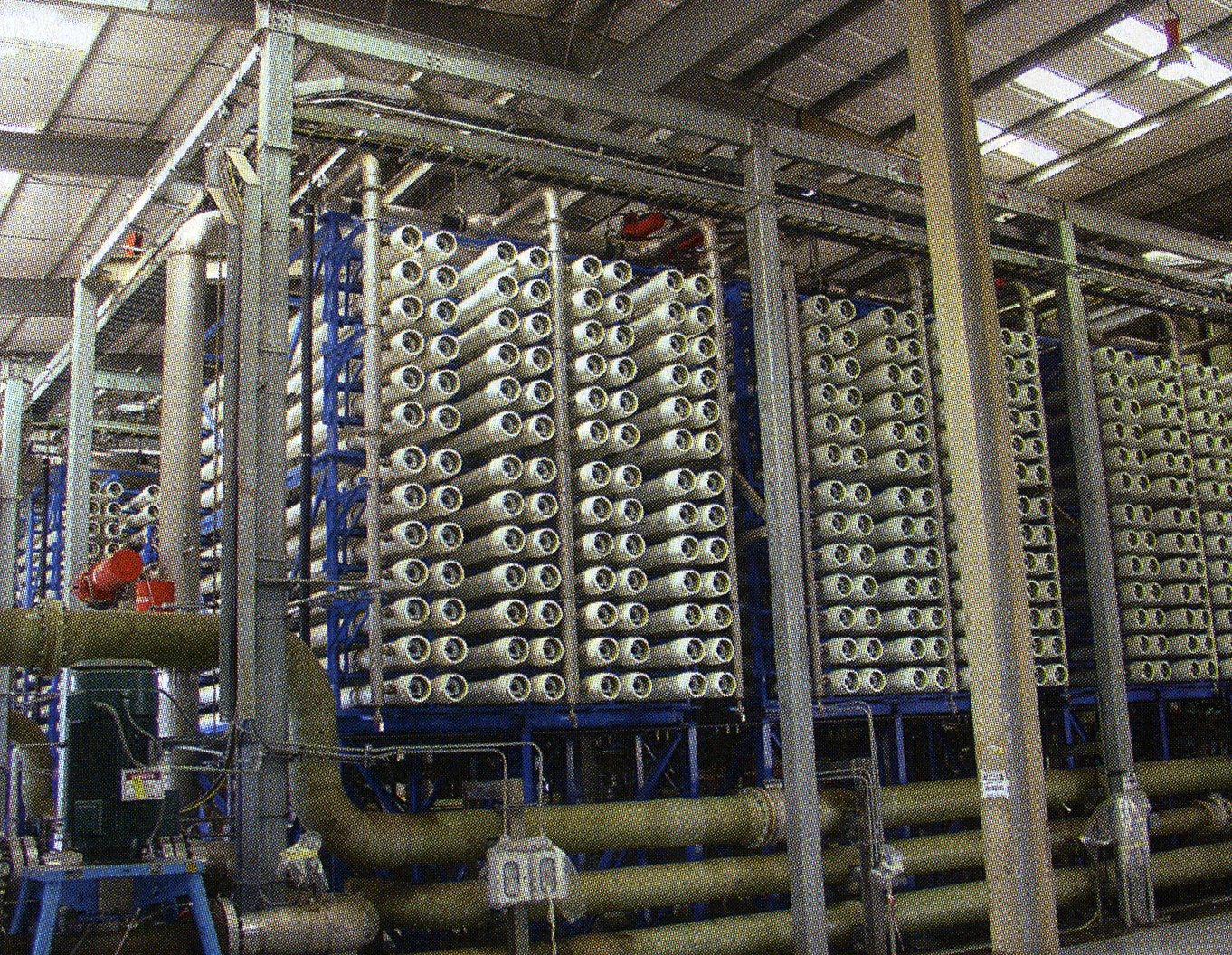 During ultrafiltration , feed water passes through a semipermeable membrane to remove macromolecules, microbes, and particulate matter. Additionally, ion exchange columns can be used to remove cations and anions from municipal water in treatment processes using ultrafiltration. Water purification processes often combine these unit operations and other operations previously mentioned, such as chlorination or adsorption to fully treat the water.

Sweeteners can be nutritive or non-nutritive. The most common nutritive sweetener used in soft drinks is high fructose corn syrup, which is prepared by converting cornstarch to glucose and fructose. Both sugars are separated then blended to a specific composition to ensure uniformity of taste. The most common non-nutritive sweetener is aspartame, which can be used alone or blended with other sweeteners to produce a tasteful sweetener with low caloric value.

Acidulants, typically phospho ric or citric acid, are used in soft drinks to provide a tart flavor and to adjust the drink to the desired pH. Preservatives are added to soft drinks to prevent yeast, mold, and bacterial growth. Benzoate and sorbate salts are commonly used and are especially effective in more acidic soft drinks, d ue to the way they interact with acids .

The precise composition of many soft drink flavorings is proprietary, and the owners often prepare and sell a “beverage base” mixture to soft drink bottlers. Flavorings typically include combinations of fruit juice flavors, essential oils, oleoresins, and/or alcohol extracts. Fruit juice flavors are prepared by concentration . Essential oils and oleoresins , a mixture of resins and essential oils, are prepared through distillation or liquid extraction of solvents drawn from fruits, herbs, roots, or spices. These operations are viewed in depth in the Spices and Extracts module. Alcohol extracts are prepared by dissolving flavored bodies, such as herbs or roots, in alcohol and water. Filtration is then used to remove precipitates. The result is a clear, flavorful extract to be used in soft drinks.

Colorants are added to soft drinks to increase the appeal to consumers. While some soft drink ingredients provide natural color, caramel or other artificial colors are added to supplement the coloring. Caramel color, mostly used in cola and root beer, is prepared by heat-treating a carbohydrate source. The source is also exposed to a catalyst , typically acid, base, or salts, depending on the specific caramel being manufactured. Additionally, other artificial colors can be added during syrup mixing in the production process, typically in powder form. In the United States all artificial colorants must be tested and approved by the FDA to prevent accidental harm to the end user.

After preparation, the ingredients are ready for the next step of the process : soft drink production.

The first step of soft drink production is syrup mixing. This combines soft drink ingredients with some treated water to create a concentrated syrup for further processing. While syrup mixing operations may vary depending on the soft drink recipe or bottler, a general procedure is carried out in stainless steel mechanically mixed tanks . First, treated water is added to the tank. Then, chemical preservatives, in the form of salts, are mixed in until they are dissolved in the treated water, followed by nutritive or nonnutritive sweeteners and specific flavorings. During the operation, acidulants and colorants may also be added to achieve the desired pH and aesthetic. At this point, additional treated water is added and the mixture is left to agitate . The video below shows a powder addition to a mechanically mixed tank used in the soft drink industry .

After mixing, syrup and treated water are blended in liquid-liquid mixers . A common water-to-syrup ratio is approximately 5:1. This unit operation can be a batch or continuous process. In the continuous blending process, the syrup and water flow rates are constantly metered using different flow meter s . Pumps, typically positive displacement pumps , shown below, are used to transport the syrup and the treated water during blending. 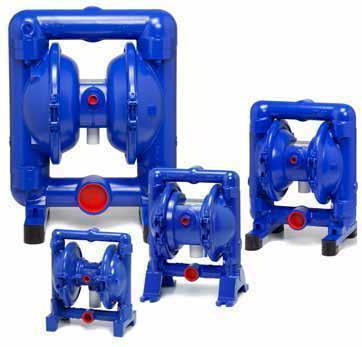 After syrup and water blending, carbonation of the mixture is the last step in soft drink production. Carbon dioxide gas is added to soft drinks to provide a sharp taste and the characteristic bubbling and fizzing. T he carbon dioxide gas is commonly added to a mechanically mixed tank, filled with syrup and water, under pressure and at cooler temperatures to maximize the concentration and resulting fizziness of the drink.

As mentioned previously, benzoate and sorbate salt preservatives are typically added during the syrup mixing operation. These preservatives inhibit the growth of yeast, mold, and bacteria that may spoil the beverage.

To further preserve the product, soft drinks are packaged into containers, typically glass or plastic bottles or aluminum cans. During this filling operation, soft drinks containers are transported using conveyors into a filling machine, such as is shown below. 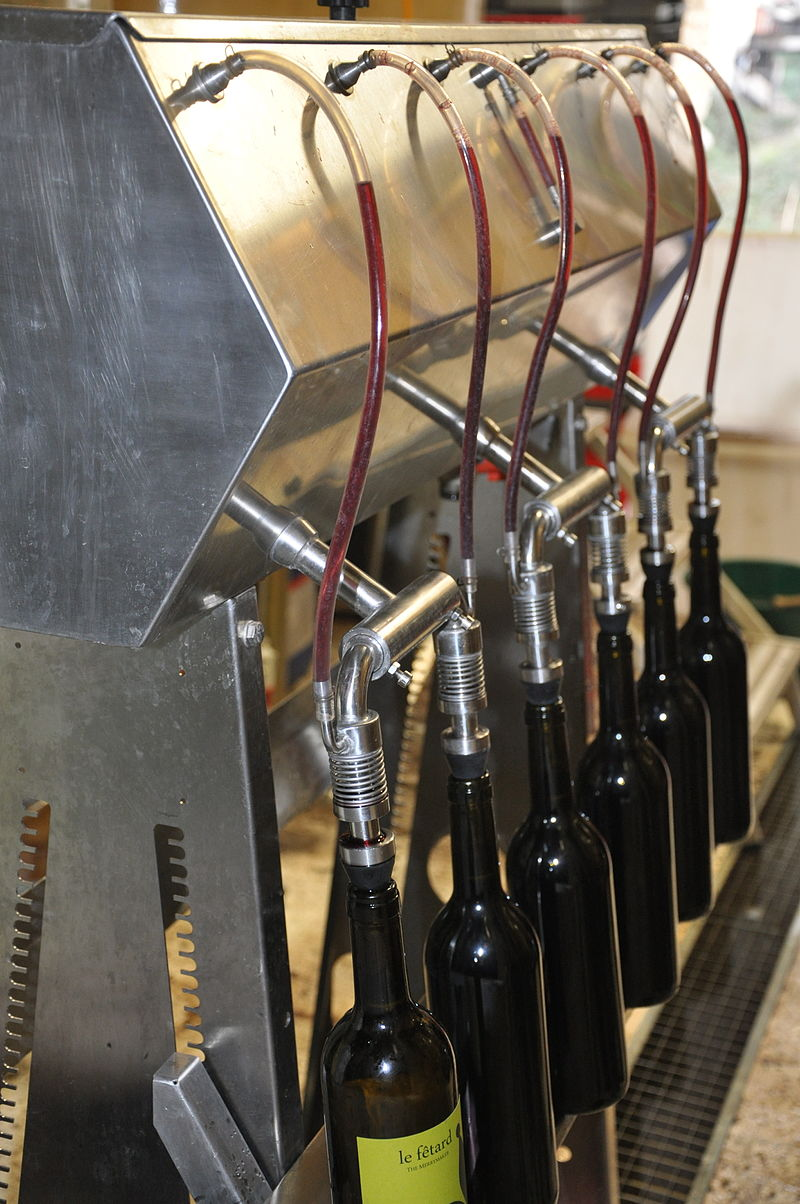 An empty bottle or can is fed into the filling machine. The container is flushed with carbon dioxide gas then evacuated of the gas. Then, carbon dioxide gas fills the bottle again and a liquid stem within the filling machine opens. Product flows into the container when the filler pressure and container pressure are equal. The product is typically cold - filled to prevent dew from building up on the bottle. After filling, more carbon dioxide flows into the bottle to build pressure. Then, snifting occurs . S nifting is the process of allowing the buildup of pressure in the head of the bottle to equilibrate in a controlled manner . Finally, the containers are capped and conveyed to secondary packaging, such as boxes. In this operation, bottles are often labeled, typically via inkjet, for traceability in the event of a product recall.

Stringent quality control methods are practiced in soft drink production in the United States to comply with regulations and periodic inspections from the U.S. Food and Drug Administration (FDA). These methods aim to prevent spoilage and any resulting harm to soft drink consumers.

For example, the FDA must approve all chemical additives, such as colorants and preservatives. After production, soft drink beverages are sampled and undergo lab tests to ensure product specifications are met for parameters including percent solids, acidulant content, taste, and microbial content. The solids content is measured using brix refractometers , shown below. 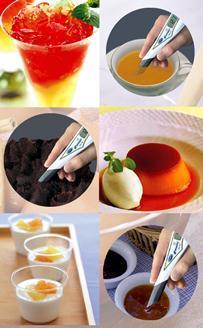 Acidulant content is typically measured using spectrophotometers . Additionally, microbial presence can be detected by the use of membrane filters . Aside from post-production testing, treated water and syrup may also be tested by the same methods to prevent quality issues downstream. Furthermore, in-line monitors can be used to measure the composition of process streams as a method of in-process quality control

After being properly preserved by packaging and passing quality control specifications, the final soft drink product is ready for delivery.