Chromatography columns are used to separate mixtures. In any chromatography technique, there is a stationary phase that is usually solid or liquid and a mobile phase usually liquid or gas, that moves through it.

Gas chromatography (GC) is used to separate components of a mobile gas mixture by flowing the gas past a stationary liquid or solid phase. 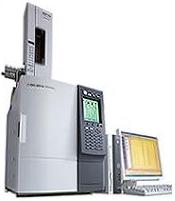 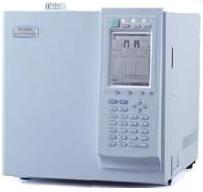 Chromatographic separations are based on differences in the strength of the interactions between the individual components of the gas mixture and the stationary phase. The components having a stronger interaction with the stationary phase will remain immobile in the column longer, resulting in a separation. The table below shows the different types of gas chromatography and their respective characteristics.

Gas chromatography machines contain five major parts: a source of carrier gas, an injector, a column, a detector, and a data processing unit.

The most common carrier gas is Nitrogen, but Helium, Argon, or Hydrogen can be used. The gas is injected through an injection port, which is designed with high capacity so liquids that are normally at room temperature can vaporize. The most common injector is the flash vaporization unit pictured below.

The material of the column is determined by the gas mixture. Common materials include Copper, Aluminum, glass, and stainless steel. Most GC separations are carried out in packed columns filled with adsorbent. The GC column must operate isothermally. The next sections describe the various types of detectors found in chromatography columns.

The thermal conductivity detector, TCD, can be based on one of two concepts: the hot wire (shown below) or the thermistor. The hot wire based detector (or katharometer) is the most common. The flow of pure carrier gas (reference stream) through the wires removes heat at a specific rate.

When the gas mixture is added, there is a decrease in the rate of heat removal, which raises the temperature of the wire. The data processing unit reads and records the resistance change resulting from the change in temperature.

The flame ionization detector (FID) is often used in conjunction with the TCD. It is highly sensitive to organic compounds. The FID uses a hydrogen and air flame which contains few ions and therefore has a high electrical resistance. When a substance with carbon-hydrogen bonds enters the flame, ions are produced, decreasing the resistance. The data processing unit measures this change in resistance and produces the response signal. 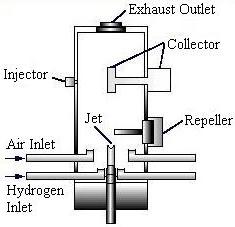 The electron capture detector (ECD) is most sensitive when measuring oxide compounds and halogens.

Using a radioactive beta source to ionize the carrier gas, a high background level of current is produced. This current is measured across an anode and cathode. Components in the gas mixture that absorb electrons, such as oxides and halogens, will cause the current to decrease sharply. This decrease in current is measured and recorded by the data processing unit. 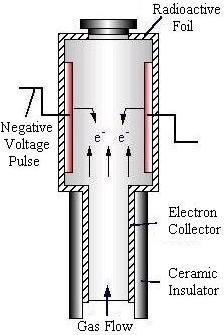 The Flame Photometric Detector (FPD) is used to detect sulfur- or phosphorus- containing compounds. A hydrogen-rich flame is used to excite the sample. Sulfur and phosphorus have unique chemiluminescent reactions that make them easy to identify. An interference filter is used to isolate the appropriate emission band before the light enters the photomultiplier tube. The lens has to be switched when detecting for the other families of compounds. 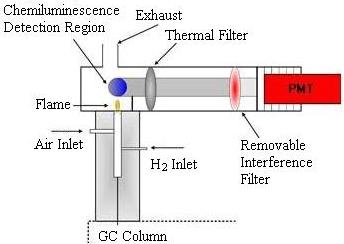 A mass spectrometer can also be used as the detection system for gas chromatography, as shown here. Unlike other detectors, a mass detector requires that a capillary column is used in the chromatograph because the spectrometer requires very low pressures. Thus a vacuum is maintained in the MS detector by using a vacuum pump. The advantage of an MS detector is that the identity and quantity of unknown components can be determined. 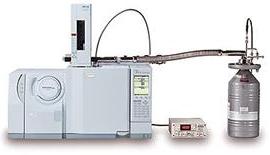 The data analysis unit consists of a computer that measures each component's retention times and displays them on a chromatogram . The identity of the component compounds can be found by analyzing where the peaks fall with respect to time. The areas under the peak are related to the concentration of each component.

Gas chromatography is generally used to identify and/or separate samples which are volatile at reasonable temperatures or produce volatile derivatives that are easily formed.

GC is used in industry to separate free fatty acids from milk and in breath alcohol testing to determine blood-alcohol content. Shown below is a gas chromatogram of refinery gas standard showing 12 components. 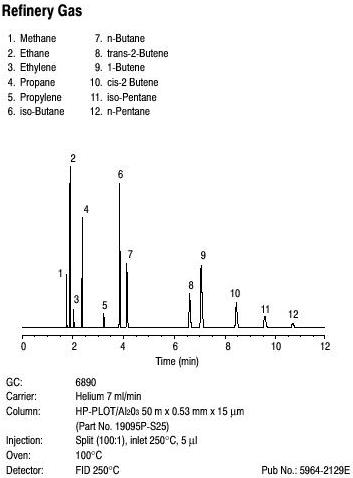 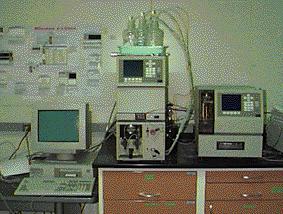 The strength of the interactions between the individual components of the gas mixture and the liquid or solid stationary phase differs. The components having a stronger interaction with the stationary stage will remain immobile longer. These components will be detected at later retention times. The table below describes the types of HPLC.

The HPLC machine consists of six major parts: a solvent delivery system or liquid reservoir, a pump, an injector, a column, a detector, and a data processing unit. The materials used and the specific set-up required depends on the liquid chromatography method chosen.

Liquid is pumped to the injector system using a pneumatic, diaphragm, or single-piston pump. Then the injection system induces the sample to the carrier stream and is designed to minimize disruptions in pressure and flowrate.

HPLC columns, such as the one pictured below, are usually stainless steel and packed with modified silica gel substrate. The substrate surface is modified to obtain better results with different solutes. 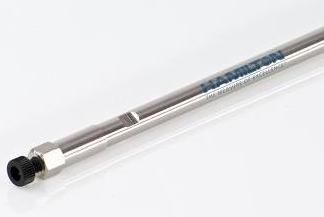 HPLC detectors are sensitive and contribute minimally to peak dispersion . The vast majority of work is done using ultraviolet (UV) absorbence and differential refractometry detectors, but devices based on fluorescence, infrared (IR) absorption, electrochemistry, and mass spectrometry are commercially available. The picture on the left below shows a schematic of a UV absorbance detector, while the picture on the right shows a schematic of a refractometry detector. 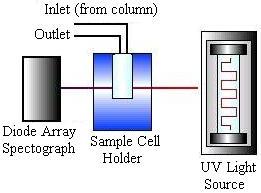 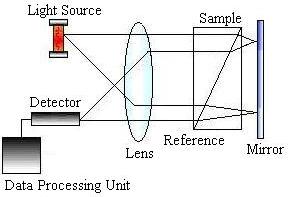 The data analysis unit consists of a computer that measures each component's retention times and displays them on a chromatogram such as the one below. 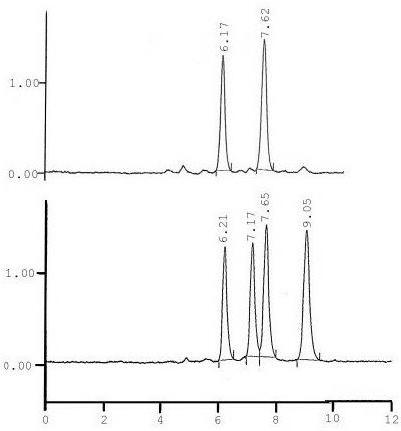 The identity of the component compounds can be found by analyzing where the peaks fall with respect to time. The areas under the peak are related to the concentration.

HPLC is used in biochemical, enviromental and pharmaceutical analysis. The picture shown here shows HPLC samples used for food analysis. The flavor fraction from citrus fruits and alcoholic beverages can be separated by HPLC. 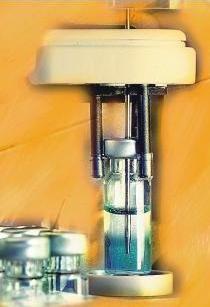 HPLC can also be used to monitor the levels of pesticides and carcinogens in air, water and food supplies.

Thin layer chromatography (TLC) separates components in a sample by passing a solvent over layers of adsorbents spread onto glass plates. Examples of TLC include:

To detect the component spots, an appropriate reagent is sprayed onto the plates, giving color to the spots. Some of the reagents are iodine and sulfuric-acid. The plate can sometimes be placed under fluorescent (UV) light. 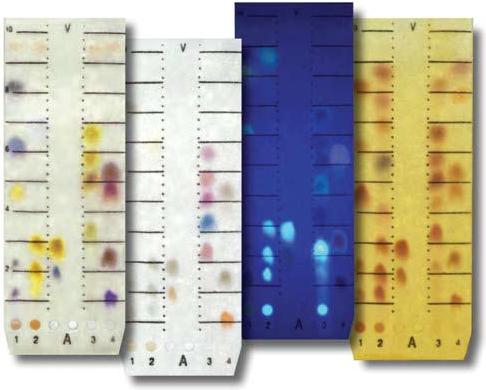 TLC can be used for separation or analysis of biological and pharmaceutical compounds. One use is in the detection of heavy metals in eucalyptus plants. The microbiologist in the picture below is using TLC to study metabolism of herbicides by lake bacteria and algae. 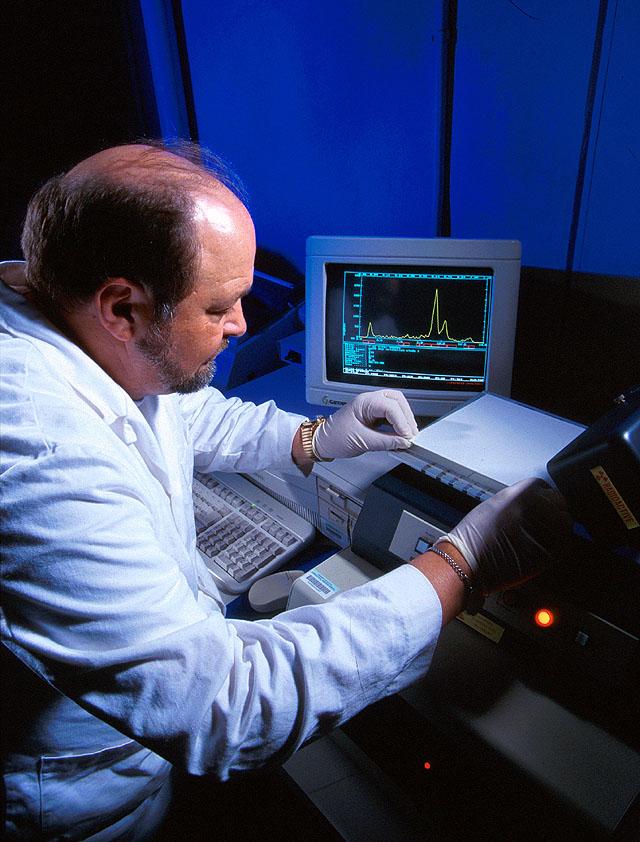