Spectrometers use light wavelengths to investigate the chemical composition of a sample. Atomic spectrometers use an analytical method by which one or several elements in unknown mixtures can be detected. 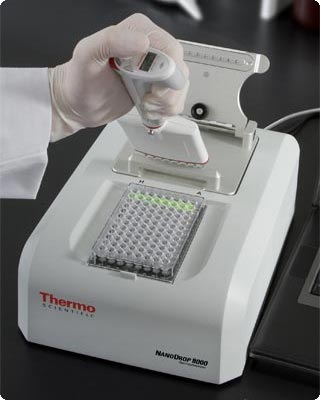 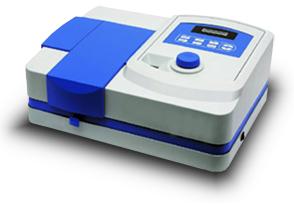 Spectrophotometers are used to analyze the optical properties of a sample by shining a beam of light into it. The transmittance of the sample is measured by a photosensitive detector or group of detectors, placed behind the sample.

Spectrophotometers measure the absorbance, A, or the transmittance, %T, of a beam of light of a certain wavelength. Wavelengths of lights within a certain bandwidth can be selected. 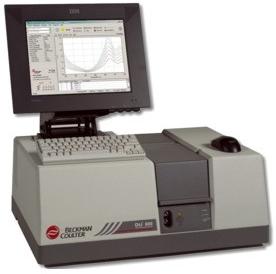 The DU 800 is for Laboratory Use Only; not for use in diagnostic procedures.

A spectrophotometer consists of a light source , diffraction grating , monochromator , and a detector , as shown below. The light source emits radiation in the visible, infared, or ultraviolet regions of the electromagnetic spectrum. The diffraction grating spreads this radiation into a spectrum. The monochromator absorbs this wide spectrum and filters a narrow band of wavelengths through the sample to a detector. The detector(s) measure(s) the intensity of the wavelengths of light that are transmitted through the sample.

Mass spectrometers produce ions from the chemical substance that is being analyzed. The mass spectrometer then uses magnetic and electric fields to measure the mass of these ions.

The substance is placed into a vacuum chamber, or ion source, where it is bombarded with an electron beam. Some of the electrons from the beam knock electrons off the sample, leaving charged ions behind. Some collisions are so strong that molecules are knocked into smaller pieces, or fragments. Every chemical substance has a limited number of possible fragments, which can in turn be used to identify the composition of a sample.

A mass spectrometer produces a plot of the mass spectra of a chemical substance. The plot is defined by the mass-to-charge (m/e) ratio vs the relative intensity or abundance of each substance. For example, the mass spectra of water and ammonium are shown below. Both water and ammonium have a mass of 18, but when split into their fragments, exhibit different spectra: Water results in peaks at 17 and 16 m/e, whereas ammonia has additional peaks at 14 and 15 m/e.

As shown in the schematic, mass spectrometers generally consist of an ion source in which molecules are ionized; an analyzer, where ions are separated by their mass-to-charge ratio; and a detector that registers the number of ions. 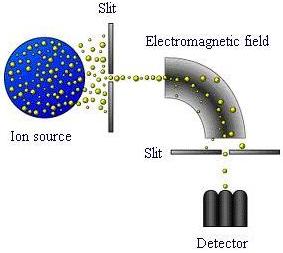 The ion source contains a mixture of ions with different mass-to-charge ratios. These ions travel, contact the electromagnetic field from an electric and/or magnetic source, and are separated according to their mass-to-charge (m/e) ratio. Another slit allows a certain fraction of ions to reach the detector. This slit will be large if many ions need to be detected and low resolution is acceptable. Otherwise a small slit would be used.

Mass spectrometers are categorized based on the method of ionization , ion analysis , and mode of detection .

Mass spectrometers are used for a wide variety of analyses, from environmental toxins to petroleum products. In the picture below, the Sample Analysis at Mars (SAM) instrument is getting installed into NASA's Mars rover, Curiosity. Curiosity will be used in NASA's Mars Science Laboratory mission to analyze the geological surface of Mars. The SAM contains a mass spectrometer that will check Mars for elements that are essential to life as we know it, such as nitrogen, phosphorous, sulfur, oxygen and carbon. 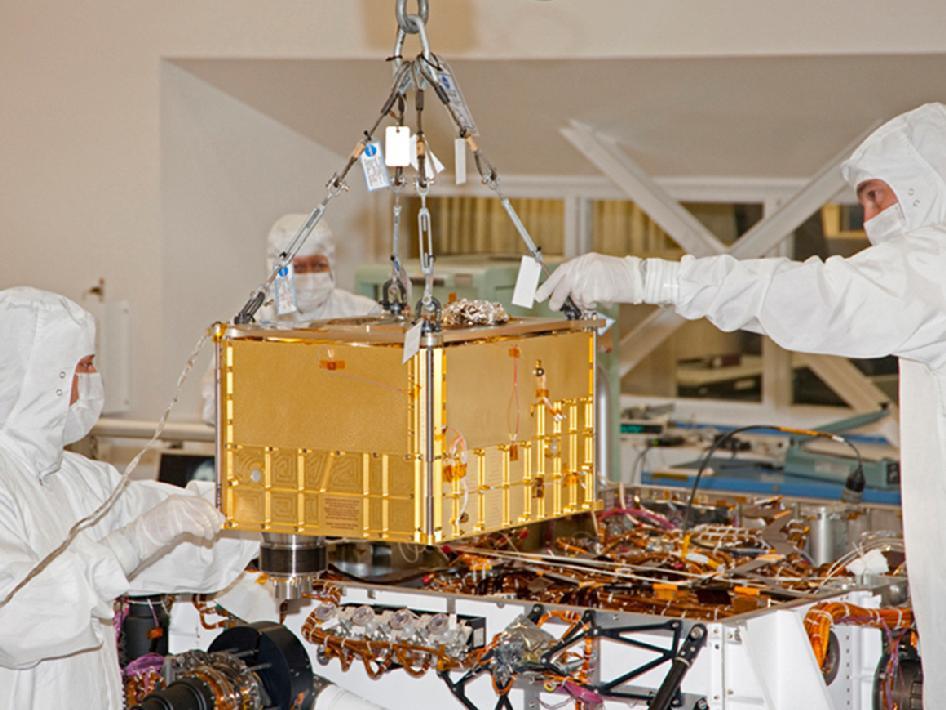 Pictured below is an illustration of NASA's Curiosity rover, equipped with a mass spectrometer, on Mars' surface. 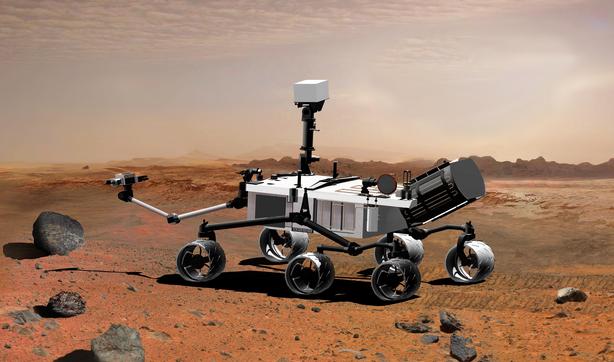 Mass spectrometers are widely used in laboratories for educational purposes and in the field to study the emission of molecules. They are also used to help trace metals and biological materials, including the products of genetic engineering.

Infrared spectrometers are used to measure the wavelength and intensity of the absorption of infrared radiation by a sample. The measurements provide valuable chemical composition information. 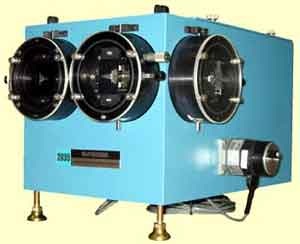 Infrared spectrometers, such as the one shown here, measure the frequencies at which the sample absorbs the radiation and the intensities of the absorptions. The infrared radiation excites the molecular vibrations to higher energy levels. Excited vibrations that cause a change in the dipole of a molecule are picked up by the spectrometer. Vibrations that do not affect the dipole are said to be infrared inactive. For this reason, complete analysis of a sample is usually difficult. 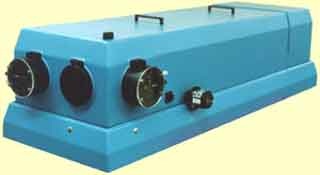 Shown below is a schematic of an infrared spectrometer. The sample is loaded into the spectrometer and a light source sends infrared radiation towards it. The sample absorbs some of the radiation and the exiting radiation is sent to a monochromator (as in the schematic) or interferometer to isolate the desired wavelength. This filtered signal is sent to the detectors , where the signal is analyzed. The analyzed data is sent to a computer where the information can be displayed.

Interferometers are similar to monochromators in that they also isolate a specific portion of the electromagnetic spectrum. Interference is used to selectively transmit a certain wavelength. Interferometers are the more popular filter on modern infrared spectrometers.

The wave enters, is split by a beam splitter, and is sent to two mirrors. One mirror is free to move, while the other is fixed. The mirrors reflect the wave back to the beam splitter, where they are once again joined. The action of the moving mirror and the beam splitter allow for interference between the light patterns, and only selected wavelengths are transmitted out. 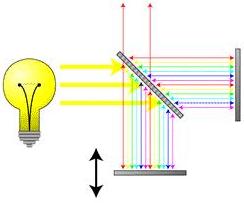 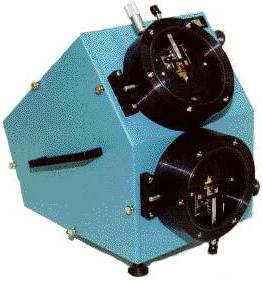 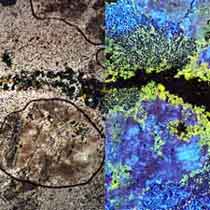 Atomic absorption spectroscopy is an analytical method that allows the user to determine the presence and concentration of one element in a mixture for each run.

One characteristic of atoms is their ability to absorb light. In atomic absorption spectroscopy, heat applied to a solution by a flame or graphite furnace produces free atoms which absorb light from a primary source. Atomic absorption analyses the frequencies or wavelengths of the absorbed light to characterize the elements present.

In an atomic absorption spectrometer a lamp emits radiation that is absorbed by an atomized sample . The radiation, continues on to a monochromator , where the signal is filtered. This filtered signal is picked up by a detector . The detector is usually linked to a computer or similar device in which the result of the scan can be displayed.

Using a flame to atomize the solution is the conventional method. The sample is aspirated into a specific flame. The vapor supply to the furnace is either air-acetylene or nitrous oxide-acetylene. 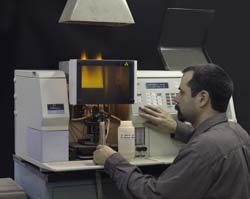 Using a graphite furnace to atomize the sample is the more efficient of the two methods. Although the process takes longer than for a flame, less sample is required and better results can be found. The graphite furnace contains a tube of graphite with an electric current running through it . The electric current heats the graphite to several temperatures that correspond to steps in the atomization. The first step is to dry the sample. Next the furnace is hot enough to ash the organic matter. Finally, the analyte atoms are vaporized.

Atomic absorption is used to test industrial materials. It is commonly used in the steel, petroleum, and paint/coatings industries. The picture shown here shows a coil being coated by a product that can be tested for contaminants using atomic absorption spectroscopy. 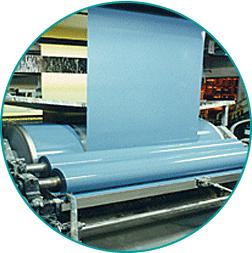 Atomic absorption spectroscopy can be used in testing clinical and biological materials. It can determine the presence and amount of any metal in blood, urine, and synovial fluids.

Test kits are also used by law enforcement to determine the presence of barium, antimony, copper, and lead on a suspect's hands. These elements will be found on the hands of someone who has just fired a gun. The crime laboratory uses a swab of the suspect's hands in an atomic absorption spectrometer.

Atomic absorption spectroscopy is also used in environmental applications. It can be used to test natural waters, sediments, and plant materials. It is important in the testing of drinking water by water treatment plants to ensure safe amounts of materials such as lead, excessive nitrates, and radon.

Unlike atomic absorption spectrometry, which can only determine the presence of one element at a time, atomic emission spectroscopy can measure multiple elements at once. 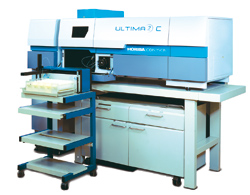 Atoms can emit light when they move from an unstable steady state to a stable one. In atomic emission spectroscopy, a sufficient amount of thermal or electrical energy is required to excite atoms in an unknown mixture into the unstable state. As they return to a more stable configuration, light is emitted from the atoms. The wavelength of light is dependent on the elements present in the mixture. 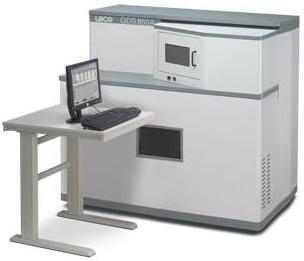 Atomic emission spectrometers are similar in design to those used in atomic absorption. One difference is that no primary light source is necessary. Also, instead of a monochromator, a polychromator is used to simultaneously measure several elements.

Another difference is in the heat source. Energy is required to not only atomize the sample, but also excite the atoms into an unstable steady state. Atomic emission spectrometers use one of two types of heat sources: ICP or spark/arc.

Inductively-Coupled Plasma Atomic Emission Spectroscopy, ICP-AES, is a high temperature (5500-8000 K) source of excitation for the elements in the sample. The plasma is typically created by flowing argon gas through quartz tubes. A radiofrequency (RF) generator creates a magnetic field in coils surrounding the tubes. The sample is then excited, and the argon gas carries it to the polychromator and detector. 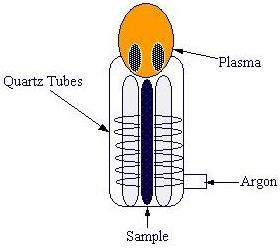 Two metal or graphite electrodes are used in spark/arc emission. The source of energy is a current pulse in spark. In arc, continuous electrical discharge is the source. The amount of energy transferred to the sample is enough to atomize it and excite the atoms. 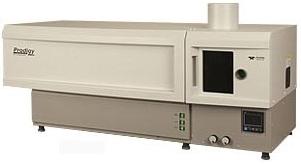 ICP atomic emission spectrometers are used to find metals in many substances. In the picture below, ICP spectroscopy is used for elemental analysis of samples in a lab. They can be used in metal coating and painting industries. They are also commonly used in food and drug manufacturing to determine the amount of nutrients in a sample. For example, they are used to determine the amount of calcium in dairy products. 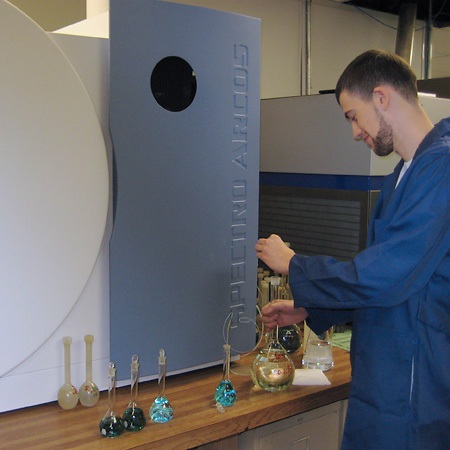 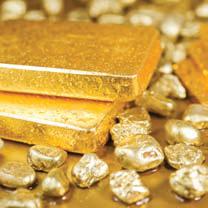 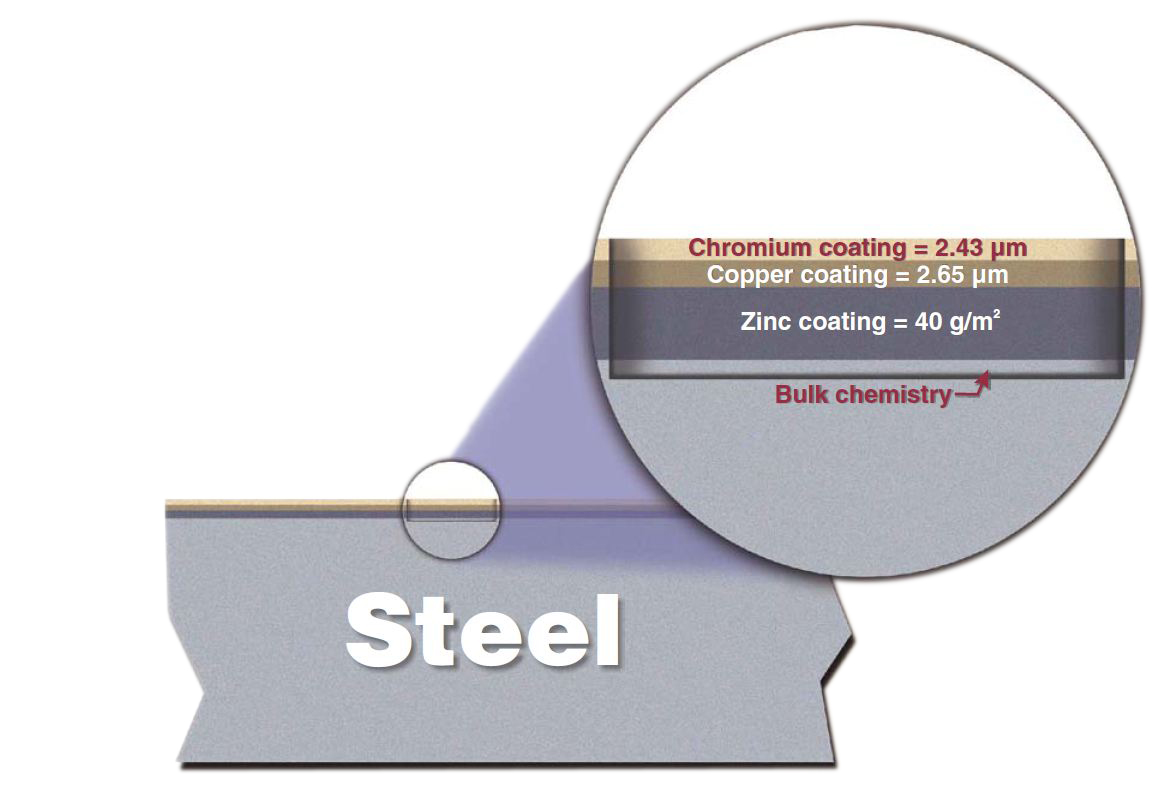 Atomic fluorescence spectroscopy uses the emission of light by atoms that have been excited to higher energy levels through the absorption of electromagnetic radiation to identify unknown mixtures. 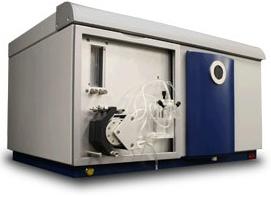 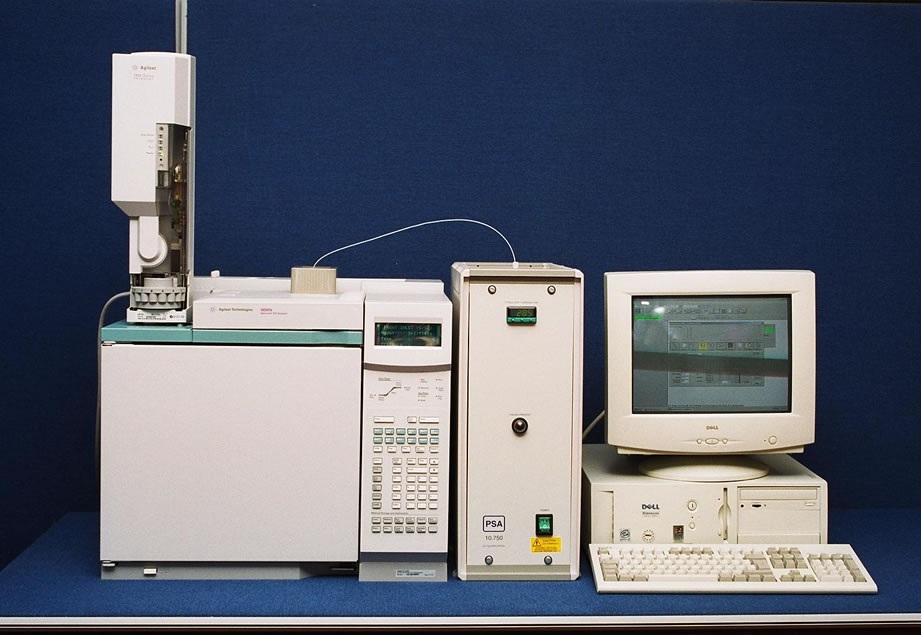 This schematic shows the design of a basic atomic fluorescence spectrometer. An excitation source emits light that is passed through an atomized sample. The emitted radiation continues on to two monochromators , where the signal is filtered. This filtered signal is picked up by a detector . The detector is normally linked to a computer where the results are displayed. 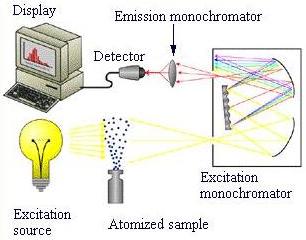 Atomic fluorescence spectrometers are useful in a variety of industries. Many pharmaceutical , clinical, and environmental companies use them. They are also particularly useful in determining the presence of certain metals in geological, agricultural, and metallurgical applications. Atomic fluorescence spectrometers can be used to help identify metals at mining sites such as the one shown below. 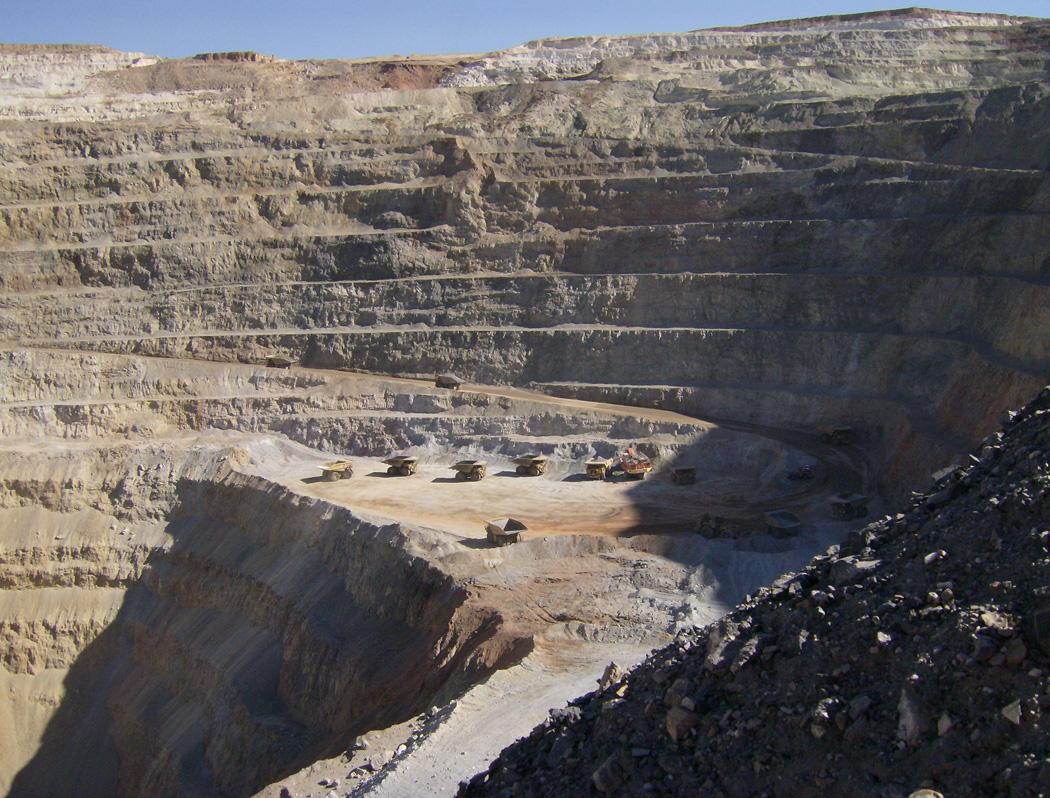