Temperature is the measure of the average internal energy possessed by the molecules of a substance. There are four popular units of temperature.

Temperature is typically measured using one of the four scales shown above, along with the conversion equations.

Because it is difficult to measure molecular activity directly, temperature is determined by measuring a physical property that is dependent on temperature in a known manner.

A thermometer is easy to use in the home and in the laboratory.

Three types of liquid-filled thermometers are available, depending on how much of it will be immersed in the medium.

The entire thermometer is exposed to the medium being measured. 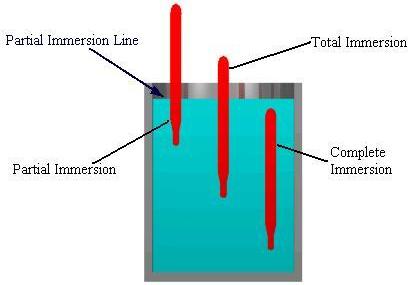 Alcohol or mercury are often used as the thermometer fluid because they expand in a predictable manner.

Thermometers are very popular in the research industry and in schools. Here a thermometer is being used to measure the temperature of a liquid. 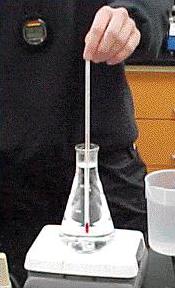 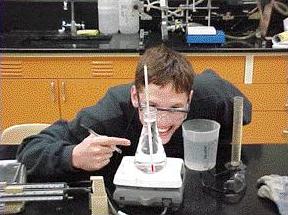 Thermocouples, also called thermoelectric couples, are the most common type of temperature sensors in the chemical process industry. They use voltage to measure differences in temperature. 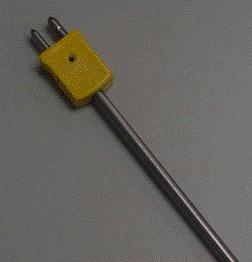 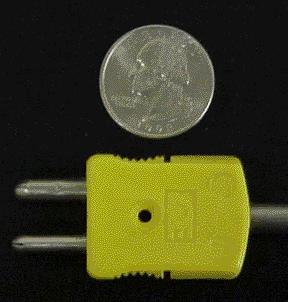 There are three types of junctions available.

Junction is welded to the sheath. Best for corrosive gas and liquid temperatures, and for high pressure. Has a faster response time than ungrounded junctions.

A thermocouple is composed of two wires of different metals , A and B, connected at two junctions that are at different temperatures, T and T r , shown below. The temperature difference between the two junctions generates a voltage difference which is measured by a potentiometer. The choice in metal pairs is dependence on their electrical properties, stability, and reproducibility. Some common combinations are chromel and alumel, iron and constantan, copper and constantan, and platinum and platinum-rhodium. 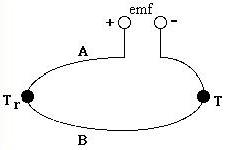 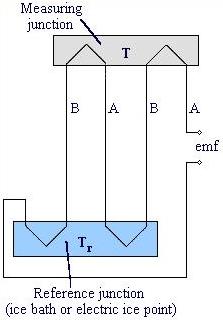 An electric ice point consists of several reference wells into which the reference junctions are inserted. The wells are extended into a sealed chamber containing water. The outer walls of the chamber are cooled, freezing the water in the cell. The freezing water causes an increase in volume which is sensed by a bellows . The bellows operates a microswitch that turns off the cooling element, thawing the water. The alternating freezing and thawing of the water in the cell accurately maintains an environment of 0°C around the reference wells.

Depending upon the metal combination, thermocouples have different temperature ranges and environmental constraints (e.g. air or vacuum).

Thermocouples are sometimes attached to pieces of equipment to monitor temperature during operation. Thermocouples are often used in gas-fed heating appliances that use a pilot light to ignite the main gas burner, like the water heater pictured below. If the pilot light goes out, then the thermocouple will cool down and the gas valve will be closed.

Thermistors are made of materials whose electrical resistance changes with temperature. They are very sensitive and accuracy is usually limited only by the readout device.

Thermistors are manufactured from oxides of nickel, iron, cobalt, copper, titanium and other metals and are covered by an epoxy.

Thermistors also come in a variety of shapes and sizes depending on the application.

Thermistors can be used in vapor or gas enviroments, as well as on flat surfaces.

Thermistors have many applications. For example, two thermistors placed on a pipe at different locations can be used to monitor heat loss. The picture below shows a cross-sectional view of a pipe with a thermistor. 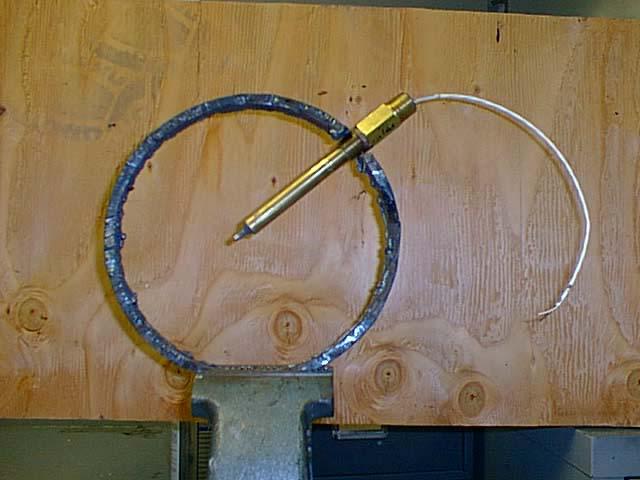 In addition, a thermistor and a variable resistor together can be used for temperature control when a heater or cooler is connected to the circuit, like in the thermostat pictured below.

Resistance temperature detectors are the second most widely used temperature sensor device in the chemical process industry behind thermocouples. Like thermistors, RTDs work by measuring a change in resistance with temperature.

Unlike thermistors, RTD's are made of pure metals, such as platinum, or copper.

RTD's have many uses, but are most often seen when a high degree of accuracy or a fast response time is needed. Distillation columns, reactors and heat transfer units usually have RTD temperature sensors, because a few degrees of inaccuracy could result in wasted steam, extra feedstock or a rejected product.

A pyrometer is a device that measures the temperature of an object at one point by measuring the total power density emitted. Pyrometer designs range from handheld to fiber-optic to analog devices.

The two main types of pyrometers are infrared, such as the one shown here, and optical. Pyrometers work on the principle of Planck's Law that relates the temperature of a black body to the wavelength of emitted radiation. Because Planck's Law is for a black body, IR pyrometers must compensate for the difference in emissivity, which is the measurement of a material’s ability to absorb or reflect energy. 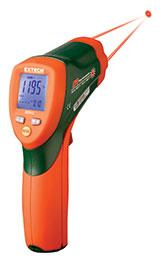 These pyrometers use infrared light to measure the temperature of objects. The most basic design consists of a lens and a detector. The lens focuses the infrared energy onto the detector, which converts the energy into an electrical signal that is displayed as a temperature reading after compensating for the ambient temperature and emissivity of the material. For single wavelength pyrometers the object being measured must completely fill the field of view of the instrument. This ensures that no objects of differing temperature are measured.

The distance-to-spot ratio (D:S) or "field of view" relates the "spot," or size of the measurement region, to the distance to the target, which helps determine how far from the target the pyrometer should be placed. The image below shows an example of a pyrometer with a D:S value of 8:1.

Ratio pyrometers, also called dual-wavelength or two-color, are less sensitive to variations in the target area. These devices measure the radiation in two different wavelength regions with two different detectors, then determine the temperature from the ratio of these two signals. Ratio pyrometers are calibrated for the signal ratio against temperature, while single-wavelength devices are calibrated for signal level to temperature. Most ratio pyrometers require the user to adjust the emissivity ratio between the two wavelengths. If the correct ratio is used, very accurate temperature measurements are possible. Ratio thermometers are also resistant to obstructions in the field of view or to targets that don't completely fill the field of view, since obstructions will decrease the signal at each wavelength equally and the same ratio will be obtained.

Shown here are examples of some cases where ratio pyrometers will obtain accurate measurements when single wavelength devices will not.

Optical pyrometers are used to measure the temperature of small, hot incandescent materials such as tungsten. To measure temperature using an optical pyrometer, an operator manually judges when the color of a filament matches that of the object . The light from the source is filtered to select a narrow wavelength band in the red region of the visible spectrum. Other filters reduce the intensity of the light to increase the temperature range capability of one instrument.

Because the wavelength is restricted to the red region, the minimum temperature that can be measured is about 700°C, limiting the use of optical pyrometers to specialty applications.

Pyrometers are most useful for measuring the temperature of objects that are at high temperature, moving, surrounded by an electromagnetic field, or in a controlled environment. They are commonly used for racecar tires, pottery kilns, steel mills, steam traps, and semiconductors. The picture below shows an infrared thermometer being used to measure the temperature inside a vent. 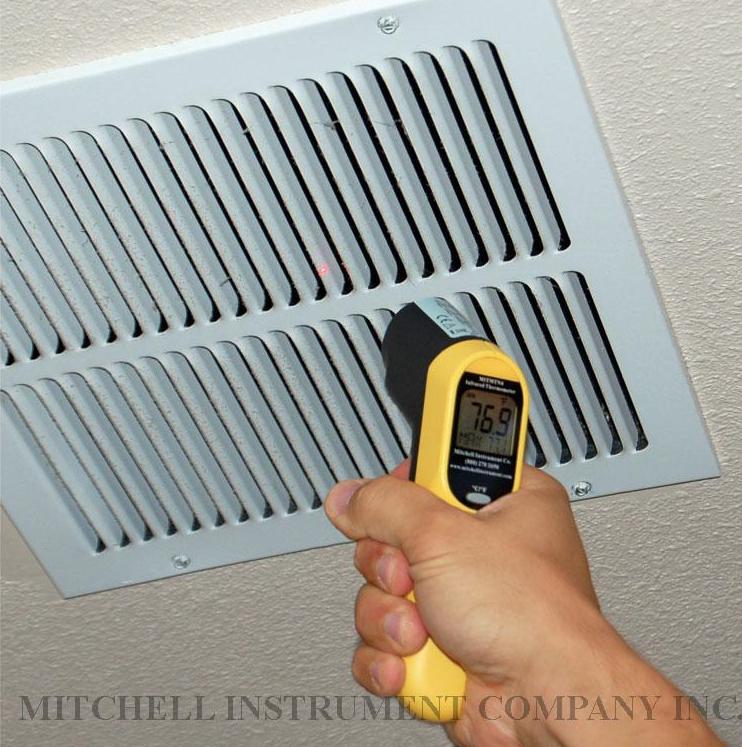 A helix in the tip of the stem is made of two metals pressed together. When a temperature change occurs, one metal expands a little more than the other, causing the connected needle to rotate, indicating a change in temperature. 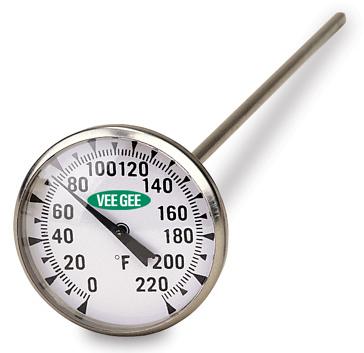 Bi-metal thermometers like the one pictured below can be used in refrigerators and warmers. Other applications include measurement of ground temperature or food temperature. 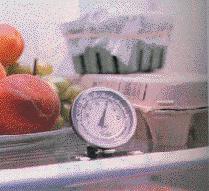