Evaporators are used to separate materials based on differences in their boiling temperatures. 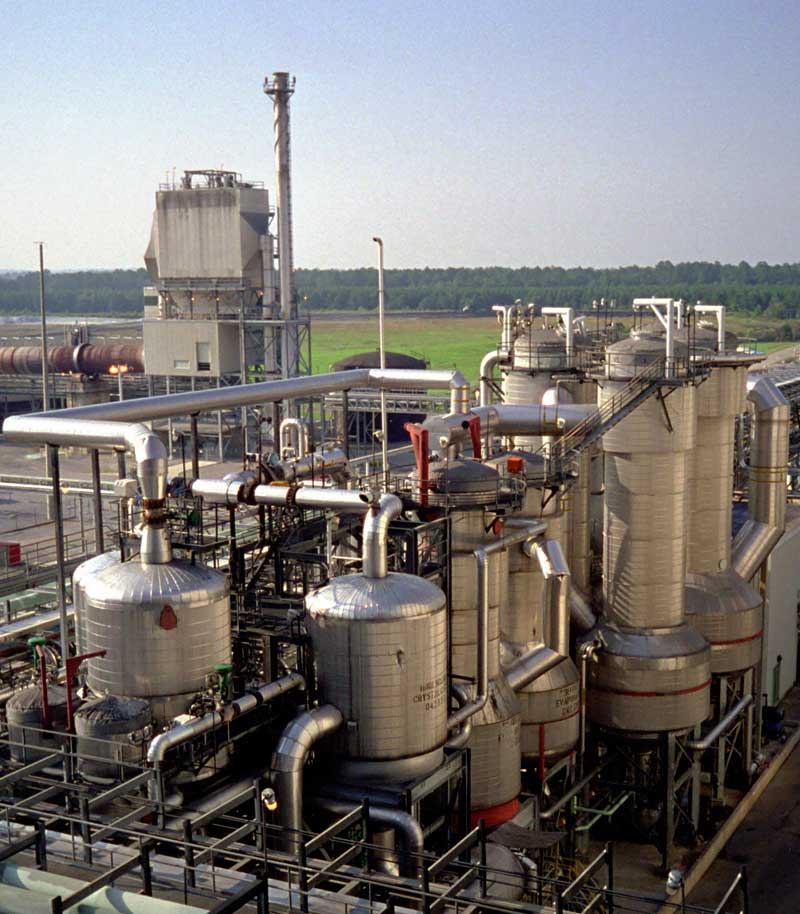 Long tube, vertical evaporators are used for evaporation more than all other types combined because of the low cost per unit capacity. 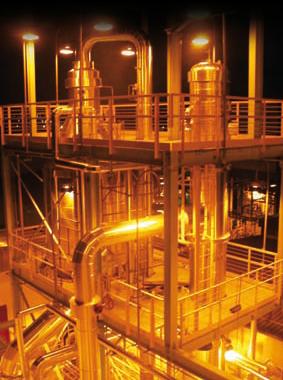 There are two main types of long-tube vertical evaporators: climbing-film and falling-film. 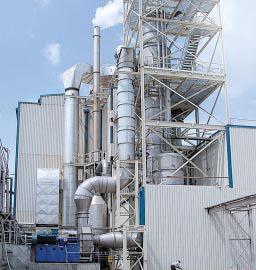 In a climbing film evaporator feed enters the evaporator through tubes in the bottom and is heated by surrounding steam. It climbs up the tubes as evaporation occurs. The liquid/vapor mixture continues up the tubes and is discharged into the vapor head. Liquid entrained in the vapor is separated by a deflector plate present above the tubes. The vapor exits out the top, while the liquor is either collected or allowed to fall back down the tubes, depending on the mode of operation.

The tubes in long-tube vertical evaporators are typically 2 in. in diameter and between 20 and 35 feet long. They may be operated in either batch or continuous modes.

One can distinguish between the two types of long-tube vertical evaporators by the location of the vapor head: The evaporator on the left is a climbing film evaporator, while the one on the right is falling film. 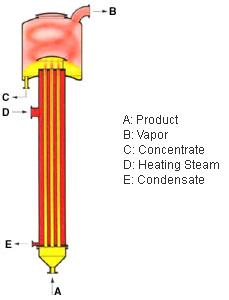 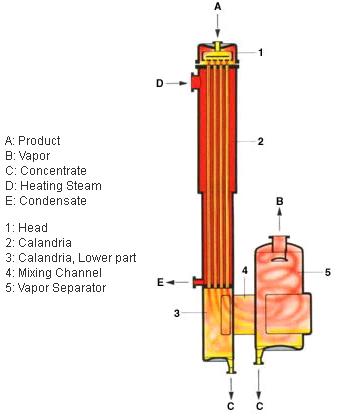 Evaporators may be also used in series to produce a more highly concentrated product. In the quintuple-effect evaporator system shown here, the vapor product from each effect is used to heat the feed to the next effect. The condensed vapor is collected in the distillate stream. 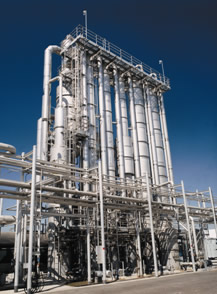 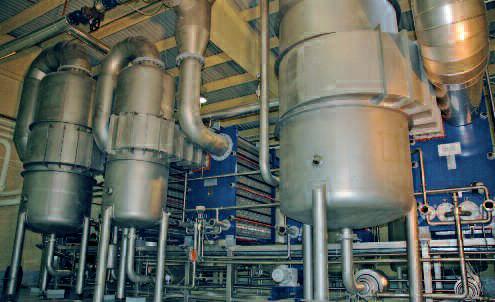 In short-tube vertical evaporators, feed enters the evaporator from the bottom. It then rises through the tubes. As the feed is heated inside the tubes, evaporation takes place. The liquid/vapor mixture continues to rise up the remaining length of the tubes and into the vapor head. The vapor flows out the top of the vapor head, while the liquor falls back to the bottom of the evaporator, where it is combined with incoming feed.

The tubes inside a short-tube vertical evaporator are between 2 and 3 in. in diameter. These tubes are expanded into sheets that span the diameter of the evaporator.

The recycle rate within the evaporator is much greater than the feed rate. A downtake ensures that the liquid from the vapor head is recycled to the bottom of the evaporator in the minimum time.

Short-tube vertical evaporators are used extensively in the evaporation of cane-sugar juice. They are also used in processes in which clear liquid solutions are present, or for non-corrosive conditions.

Horizontal tube evaporators use a tube and spray method of heat transfer and differ in this respect from other evaporators. 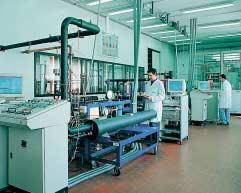 In horizontal-tube evaporators feed is sprayed over horizontal tubes that contain steam. As the feed flows over the tubes, evaporation takes place. The resulting vapor exits out the top of the evaporator, while the remaining liquor falls to the bottom of the evaporator and is either removed or recycled with the incoming feed.

Liquor is circulated through a spray distribution network over the tube's outside surface to ensure sufficient wetting of the heat transfer surface. .

The tubes are arranged so as to maximize the heat transfer area between the steam and the liquor. This arrangement also facilitates cleaning because scaling and fouling are easily removed. The picture below is a schematic of a horizontal tube evaporator.

One of the many uses of horizontal tube evaporators is the production of distilled water. Pure water is collected as vapor, while the wastewater is discharged directly from the system.

Forced circulation evaporators contain a pump to circulate feed through the apparatus. 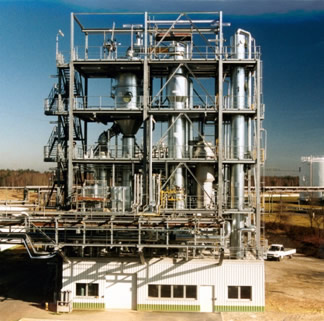 In forced circulation evaporators the feed is pumped into a heat exchanger, where evaporation occurs. The evaporated mixture then flows into the vapor head where any entrained liquid strikes the deflector plate. The vapor flows out the top of the vapor head, while the liquor is either removed or recycled.

The most common type of forced circulation evaporator is the submerged-tube type. In these evaporators the heating element is below the liquid level. This ensures that no boiling occurs in the tubes. 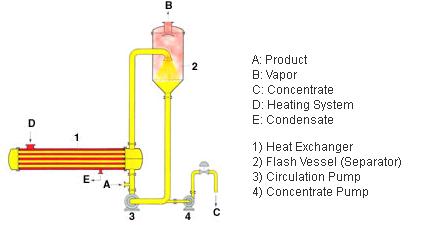 The use of a pump in forced circulation evaporators ensures continuous liquid flowrate. The pump also allows for the physical separation of the heat transfer and vapor-liquid separation components within the evaporator.

The liquid velocity through the evaporator is limited only by the pump. This is unlike other evaporators, where it is limited by other factors, such as the amount of evaporation that takes place.

Forced circulation evaporators are used in the mining industry, where the solids are concentrated. The one shown below is involved in a brine concentration process. 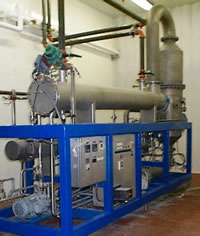 One of the main uses of forced circulation as well as other evaporators is in crystallization. They may also be used when corrosive or highly viscous solutions are to be evaporated.

Agitated, thin-film evaporators, see thin-flim dryers , use a heating surface composed of one tube of large diameter that may be either straight or tapered, horizontal or vertical. Liquid is spread on the tube wall by an agitator with rotating blades that cause the liquor to ride along the wall. See the Thin Film Dryers section for more details on this type of equipment.