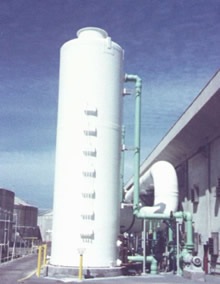 Air stripping columns are most widely used for the removal of volatile organic compounds (VOCs) from water. By forcing air through contaminated water, the VOCs are evaporated from the water and the air passing through the column absorbs the contaminated vapor. The air can then either be removed or pumped into the atmosphere if the concentration of VOCs in vapor form are low enough. The most common types of air strippers are packed-column air strippers and sieve-tray air strippers, though diffused- aeration tanks can often act as an effective means of air stripping as well. 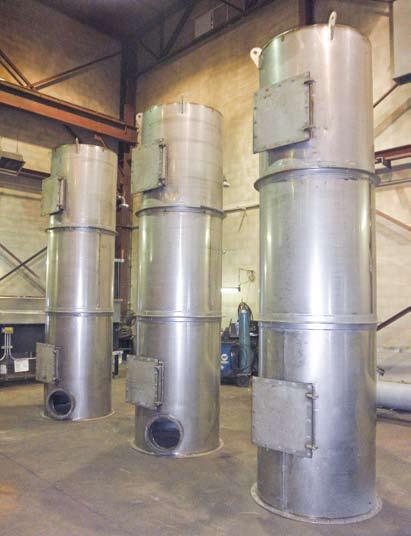 After the contaminated water enters the column, it flows down the column and through the packing countercurrent to the air stream. The packing serves to increase the amount of contact between the two streams, and enhances the stripping as a result. After leaving the column, the air is either distributed into the atmosphere, or is collected for purification.

Packing types include dumped packing and stacked packing . The packing channels the liquid flowing from the top to the bottom of the column.

Water enters from the top of the sieve-tray air stripper and trickles down over multiple perforated trays over a weir, progressing from tray to tray. Air is bubbled up through the holes in the trays and VOCs are transferred to the vapor phase for removal. The treated water exits out the bottom after traveling across the last tray.

Air stripping columns contain either trays or packing, depending on the application.

Tray types include sieve, valve, and bubble cap. The geometry of the trays affects the extent and type of contact between the vapor and liquid streams. Downcomers channel the liquid flowing from one tray down to the tray below. 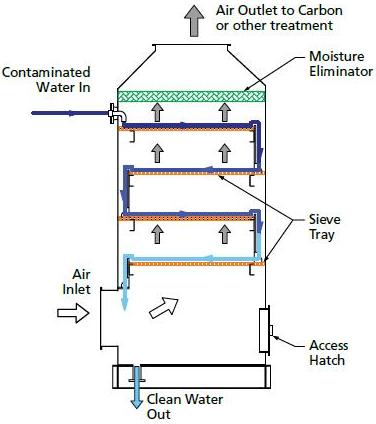 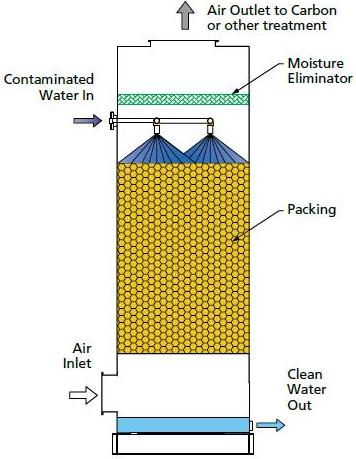 Unlike the the packed-column and sieve-tray air strippers, in which the water flows through or around a solid as it travels through the column, resulting in increased water-air contact, in diffused-aeration tanks the air travels directly through the water as it is bubbled into the tank. Water enters at the top of the aeration column and is allowed to pool within the tank. Air is diffused through the bottom of the tank and bubbled through the water, capturing VOCs before exiting at the top. This design is most effective when there is a greater vessel depth and smaller air bubbles passing through.

One common issue that can be remediated by an air stripper is water contaminated by petroleum leaks and spills. Air strippers can easily remove benzene, ethylbenzene, toluene, xylene, and trichloroethylene. Alcohols, aldehydes, or ketones, are not as easily removed by air strippers.

In the system below on the left, air is used to remove benzene derivatives, chloroethylenes, and ammonia from contaminated groundwater. On the right is an air stripping column used to remove VOCs at a potable water treatment plant. 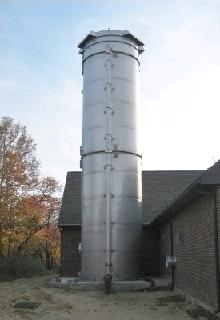 The air stripping columns pictured below are used to remove VOCs and dissolved gases from an incoming water feedstream. 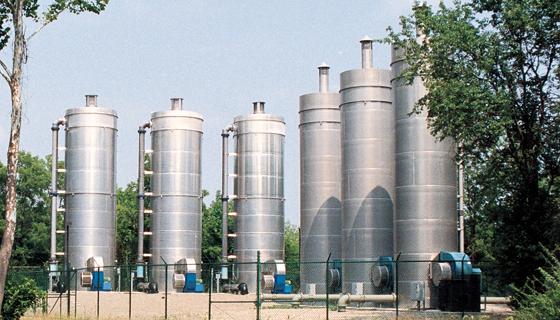 The air strippers pictured below are used in a groundwater treatment plant. These units purify the incoming water through the use of trays rather than packing. 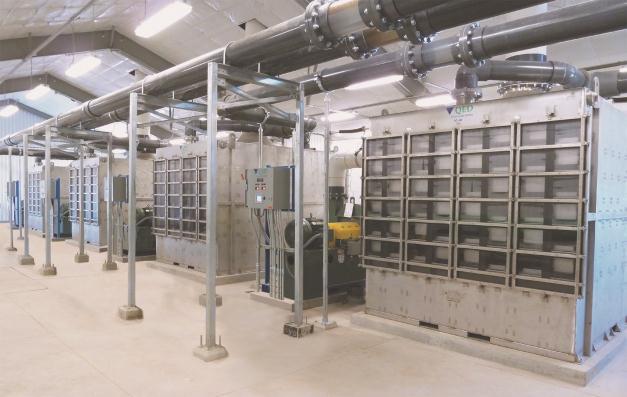 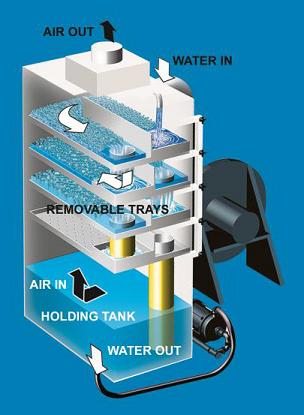 Steam strippers are similar to air strippers with one exception: instead of air, they use steam to strip volatile components from a liquid stream.

Steam strippers allow for the removal of heavy soluble organic compounds that air strippers cannot remove. The temperature of these columns is usually very close to the boiling point of water.

In a typical steam stripping column, the liquid feed is introduced at the top of the column and the steam input is located at the bottom. When the liquid enters the column, it flows down the column and through the packing countercurrent to the steam. The packing enhances the stripping by increasing the amount of contact between the two streams. After leaving the column, the vapor is either distributed into the atmosphere or is collected for purification. 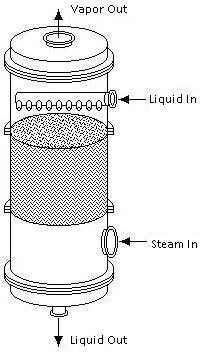 Steam stripping columns contain either trays or packing, depending on the application. These trays and packing are the same as those used in distillation and absorption columns.

Tray types include sieve , valve , and bubble cap . The geometry of the trays affects the extent and type of contact between the vapor and liquid streams. Downcomers channel the liquid flowing from one tray down to the tray below.

Packing types include dumped packing and stacked packing . The packing channels the liquid flowing from the top to the bottom of the column.

Preheating the feed before it enters the column is important because it reduces the amount of heat added to the column to achieve the required separation. The feed is preheated by either a heat recovery exchanger that cross exchanges the feed without the effluent coming off of the bottoms, a steam heat exchanger that cross exchanges the feed with a steam stream, or a combination of both.

Steam stripping columns are most widely used in the recovery of solvents and solutes, and also in the removal of Volatile Organic Compounds (VOCs) from water.

Steam stripping for wastewater purification is a distillation process where over 99% of VOCs are removed from water. Some typical VOCs are benzene, toluene, xylenes, ethylbenzene, styrene, and chlorinated hydrocarbons.

The wastewater feedstream is pre-heated and put in contact with steam in a packed or tray column. Trays or packing units facilitate contact between the contaminated water and the steam stream. The combined effects of the steam and heat cause the organic materials to transfer from the liquid into the vapor phase. As contacting proceeds down the column, the vapor becomes rich in organic materials while the wastewater gets cleaner. The organic vapor leaves the column at the top and is condensed and recovered. These hydrocarbons can be recycled back into the stripper or treated with an incinerator. The purified water that leaves the bottom of the column has very low organic contaminant concentrations and it can be recycled back into the plant's water system.